After recently retiring from his 45 year-long career back in July, Neil certainly has been part of the timber industry for a lifetime. He has always been a passionate supporter of timber and very well known within the industry. Neil was virtually presented the award by the TTJ on Friday 25th September for his outstanding contribution to the industry since he joined Donaldson’s back 1975.

Neil’s achievements are not only limited to his successful career at Donaldson’s as he became the first Scottish Chairman of the Timber Research and Development Association (TRADA) in 1988. He was also President of the Scottish Timber Trade Association (STTA) from 2004 – 2006 and was President of the Timber Trade Federation (TTF) from 2006 – 2008.

Neil Donaldson commented: “I’m incredibly proud of what we’ve achieved as a business and an industry over the last 45 years and I couldn’t be happier to be presented with the TTJ’s Lifetime Achievement Award, albeit in a slightly different way to normal. It’s an honour and also a complete shock and starts my new chapter of retirement on a real high! I can’t wait to see what future brings for both the business and the industry.” 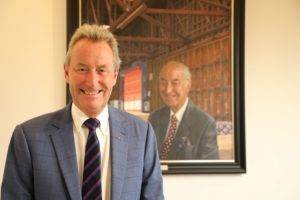 Neil Donaldson bows out after 45 years at family firm
Read more
We use cookies on our website to give you the most relevant experience by remembering your preferences and repeat visits. By clicking “Accept”, you consent to the use of ALL the cookies. However you may visit Cookie Settings to provide a controlled consent.
Cookie settingsAccept
Cookies