shortlisted in the ''Environmental Practices'' and ''Value for Money'' categories respectively.

MGM Timber and Nu-Style Products have been shortlisted in the ”Environmental Practices” and ”Value for Money” categories respectively.

We are delighted that both MGM Timber and Nu-Style Products have been nominated for the 2018 Scotland Excel Supplier Excellence Awards in Glasgow. MGM Timber is nominated in the category of “Environmental Practices” for its efforts in tackling climate change by reducing waste. Nu-Style Products has been nominated in the “Value for Money” category which recognises companies that showcase efficiency as well as value for money without compromising on quality. The winners of this year’s awards will be announced at the Awards Ceremony on the 20th of February at the Radisson Blu Hotel in Glasgow.

MGM Timber has recently invested in a new computer system in order to create a paper free ordering and invoicing system. Additionally, MGM aims to reduce landfill through improved recycling. Nu- Style’s nomination in the category “Value for Money” recognises their efforts in efficiency, meeting clients’ exact requirements and competitive pricing. “We are very proud for being shortlisted in both categories as they recognise our efforts to tackle climate change as well as efficiency and meeting our customers’ requirements. Sustainability and integrity, which are recognised in both these categories, are two of our five core values and at the heart of what we do.” Said Scott Cairns, Group Managing Director for James Donaldson & Sons Group

Founded in 1860, the JDS group has grown into a family of businesses that are market leaders in their respective fields of timber engineering, saw-milling and distribution, merchanting, roofing and cladding distribution and laminate manufacturing. MGM Timber became a wholly owned subsidiary of the group in 2005, while the group acquired Nu-Style Products Ltd in 2016. 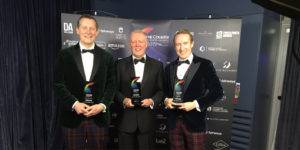 Triple Victory for James Donaldson and Sons at the Courier Business Awards
Read more
We use cookies on our website to give you the most relevant experience by remembering your preferences and repeat visits. By clicking “Accept”, you consent to the use of ALL the cookies. However you may visit Cookie Settings to provide a controlled consent.
Cookie settingsAccept
Cookies