Mark isn't only a valued member of the Donaldson Group, he's also a very loyal one. So loyal in fact that (as he likes to point out) he was in the company before the internet was even invented!

Our integrated systems manager is making his ‘Mark’ on the Donaldson Group!

Mark isn’t only a valued member of the Donaldson Group team, he’s also a very loyal one. So loyal in fact that (as he likes to point out) he was in the company before the internet was even invented!

He’s had a varied career within the Donaldson Group, having started as a business trainee. Now, as the Integrated Systems Manager, he looks after some essential business for the Group, including health and safety, quality, FSC and PEFC schemes and environmental policies.

What Mark loves about Donaldson’s is that he gets to work with some amazing people at all levels within the business. Mark commented that he likes that “everybody has the opportunity to contribute and the best ideas happen when people get involved.” It is this collaboration in fact, that helped the Donaldson Group win the Lord Cullen award for health and safety. Mark is very proud that he and the team implemented a system to make the unloading of roof trusses safer for our customers, which was adopted as best practice by the HSE and the Trussed Rafter industry.

In Mark’s role, he ensures that the Donaldson Group always acts with Integrity. For him, that runs across many factors, from the way we treat people, source our products, comply with legislation, sell, produce or deliver our products. Mark feels he can therefore say with confidence that we conduct our business in the right way.

Outside of work, Mark can be found walking his three rottweiler dogs – in fact he loves the breed so much he even has a Facebook group for rottweilers. We’re lucky that Mark is as loyal to us as his lovely dogs are to him! 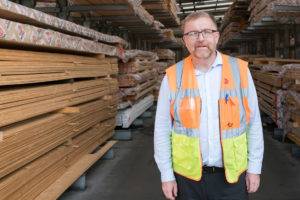 David – Sales Manager
Read more
We use cookies on our website to give you the most relevant experience by remembering your preferences and repeat visits. By clicking “Accept”, you consent to the use of ALL the cookies. However you may visit Cookie Settings to provide a controlled consent.
Cookie settingsAccept
Cookies